As the least populous of Canada’s provinces and territories, the population of Nunavut is estimated to be 39,589 in 2022.

With its limited infrastructure and restrictive supply chain, the cost of living is higher. And it is no surprise that Nunavut offers the highest minimum wage in Canada at a rate of $16.00 per hour.

While there are no age restrictions, there are a few other restrictions to receiving this wage, which will be covered in this article.

The current minimum wage in Nunavut is $16 per hour, and this has been in place since April 1, 2020. The rate is reviewed every April and, if required, is adjusted based on the cost of living.

Nunavut does not have an extensive history of minimum wage changes since it only became an independent territory in 1999.

A brief overview of the minimum hourly wage rates in Nunavut:

The minimum wage of $16 dollars an hour is the bottom line for employees in this territory. However, earning capacity can be higher.

While there is no age restriction to be eligible for this minimum wage, there are other restrictions to keep in mind.

Some of these restrictions pertain to trappers or workers at commercial fisheries. If lodging or boarding is provided for the employee, the employers here are allowed to deduct the cost from the employee’s salary.

Since these sectors amount to a significant portion of the territory’s economic output, this would be applicable to a large amount of the population.

A worker can also be exempt if they are a student in certain professions that are not regulated by the Labour Standards Act.

Since taxes in Canada are progressive, the amount you pay is dependent on your income threshold. Nunavut also follows a progressive structure for its territorial taxes.

Nunavut has one of the lowest tax rates in the country. Here is a list that outlines the tax rates for different incomes in 2022:

The federal taxes (paid in addition to the territorial taxes) are as follows:

Most wage deductions are standard across the country.

The Labour Standards Act protects employees by prohibiting employers from making unwarranted deductions. The Act makes it clear that the employee must authorize this in writing if there is a need for further deductions.

Canadian workers are obligated to contribute to the Canada Pension Plan. The first $3,500 is exempted annually, and then 4.95% is calculated on your remaining income for the year, and this is divided across your paycheques. CPP contributions result in pension payments when you retire.

Both the employer and employee pay Employment Insurance. At 1.58%, the maximum insurable amount is $60,300. The employee makes a maximum annual contribution of $952.74.

Income Tax is one of the other deductions, as covered above.

If there are court orders related to alimony, child support, insolvency, or any other valid legal deductions, these can be taken from the paycheque.

It will become the employer’s responsibility to deduct the amount according to the court order.

The minimum wage is reviewed every April and accounts for the cost of living in the territory.

Nunavut’s minimum wage was last increased in 2020, and due to the rising costs of living across the country and high inflation rates, there have been calls to increase it in 2022.

Based on news reports, the government plans to review the minimum wage later this year to ensure it can be considered a living wage.

Here is a chart for the minimum wage rates across Canada:

Which province has the highest minimum wage in Canada?

What is the average income in Nunavut?

The average income in Nunavut is approximately $68,250 per year or $35 per hour.

How much does a house cost in Nunavut?

What is the lowest minimum wage in Canada? 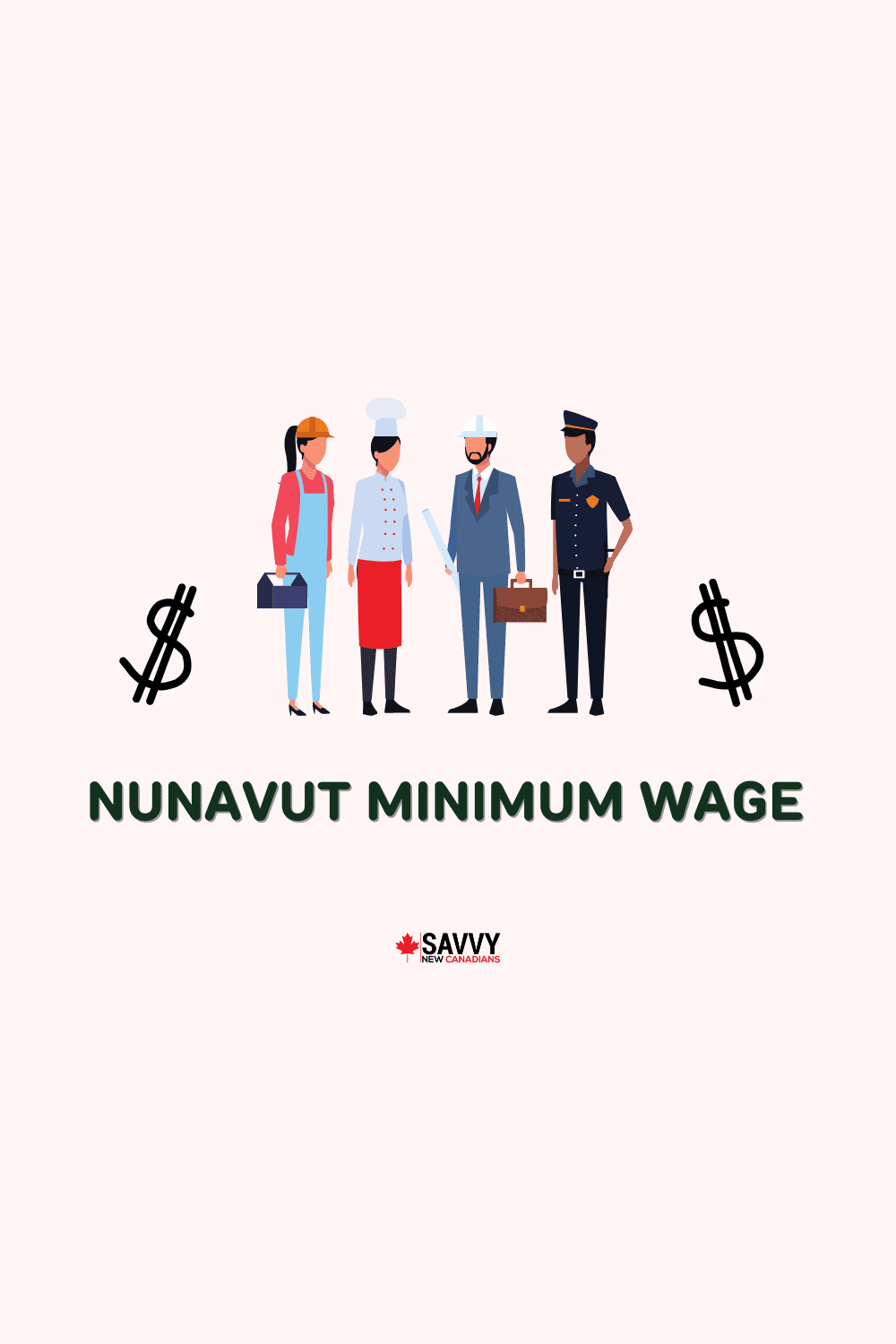 Earn 0.50% cash back on all purchases and up to 5% at select partners.

Save automatically and earn 1.20% interest on your balance.

One of the top no-fee credit cards in Canada.

Get 2% unlimited cash back on up to 3 purchase categories; 0.50% everything else.

Enoch Omololu is a personal finance expert and a veterinarian. He has a master’s degree in Finance and Investment Management from the University of Aberdeen Business School (Scotland) and has completed several courses and certificates in finance, including the Canadian Securities Course. He also has an MSc. in Agricultural Economics from the University of Manitoba and a Doctor of Veterinary Medicine degree from the University of Ibadan. Enoch has a passion for helping others win with their personal finances and has been writing about money matters for over a decade. He has been featured or quoted in The Globe and Mail, Winnipeg Free Press, Wealthsimple, Financial Post, Toronto Star, CTV News, Canadian Securities Exchange, Credit Canada, National Post, CIBC, and many other personal finance publications.

How To Protect Your Identity and Finances from Scammers: Fraud Prevention Month 2022

When are CRA Corporate Tax Instalments Due in Canada?

$350 welcome bonus when you open a new free chequing account!

Get instant and affordable life insurance quotes within minutes.

The content on this site is for informational and educational purposes only and is not intended as a substitute for professional financial advice. Always consult with a licensed financial or tax advisor before making any decisions based on the information you read on this blog.