The content on this website includes links to our partners and we may receive compensation when you sign up, at no cost to you. This may impact which products or services we write about and where and how they appear on the site. It does not affect the objectivity of our evaluations or reviews. Read our disclosure.

Do you have an excess amount of change lying around? Find out how much a roll of nickels is worth, as well as other denominations like toonies, loonies, quarters, and dimes.

Coin wrappers are specially designed to store your coins neatly in one spot. This is beneficial because banks and stores in Canada will accept them.

If you were to bring a Ziploc bag full of nickels or toonies to the bank, they may not accept them or they may have to recount them.

It’s easy enough to put together coin rolls when you have coin wrappers. They let you know exactly how much change you have.

Coin rolls in Canada each have their own value, and if you happen to have a lot of change, you might be surprised at how much money you have.

It’s also far easier to transport your loose change when you roll it up. There is actually a limit as to how much change you can cash in at one point.

That’s why you should roll up your loose change if you have a lot of it. We’ll let you know all about the coin values in Canada when they’re put in coin wrappers.

How Much is a Roll of Nickels Worth?

A roll of nickels contains 40 coins. When you use coin rollers, you can easily keep track of how many nickels you have and how much it’s worth.

With each nickel being worth 5 cents, a roll of nickels is worth $2.00.

What is a Canadian Nickel?

The Canadian nickel is a five-cent coin and is quite similar to the US nickel. The metal that originally made up this coin was nickel, which is where the name came from.

It is now the smallest-valued coin in Canada since the penny was discontinued in 2013. The nickel has been around since 1858.

It was a thin little sterling silver coin back then with the name “fish scale” due to its appearance. Today, the nickel weighs 5.000 g, has a diameter of 21.21mm and a thickness of 1.95mm.

It was given the name nickel in 1922, which is when it was introduced as a Canadian coin. The coins were made from 99.99% nickel metal and were magnetic.

During World War II, they were minted with a copper-zinc alloy and returned to being used with nickel at the end of the war.

During the Korean War, they changed the metal again because of rising nickel prices.

In 1982, they changed the metal to cupronickel. Recently, they changed it again to nickel-plated steel with traces of copper. When nickel prices rose, the old coins were removed from circulation and melted by the Royal Canadian Mint.

Nickels that predate 1982 are considered in high demand by coin collectors.

From 1942 to 1963, nickels were 12-sided and seemed to mimic the threepence coin from Britain. This was in an effort to distinguish the tombac coins from pennies as they were similar in their look.

As the coins were made so long ago, the first nickels were struck by the Royal Mint in London. This was one of the coins introduced to the Province of Canada at the time.

All Canadian coins were created in England until 1908 when the Ottawa branch of the Royal Mint opened.

If you’re counting change to see how much you have, it’s a great idea to roll them up in coin wrappers.

Coin values in Canada vary, and so does the number of coins that go into each roller.

Each coin wrapper should include the information you need to determine how many coins fit in a roll and how much it’s worth.

A roll of nickels is worth $2, and there are exactly 40 coins in a roll. To make $5 from your nickels, you would need to have 100 nickels.

You’d need 400 nickels or 40 rolls of nickels to get you $20. Chances are, even if you roll up hundreds of nickels in your coin wrapper, a bank won’t accept them all at once.

How To Get Rolls of Nickels in Canada

There are a few reasons you’d want to get a roll of nickels. If you are going to be selling something at a farmers’ market or at your yard sale, you may need a lot of change.

The easiest way to purchase a roll of nickels is at your bank.

If you’re looking to find collector nickels, you can purchase a roll of nickels from a variety of businesses.

The Canadian nickel has had a long history, and finding the nickels that predate a certain year are sought after by collectors.

These nickel coin rolls are going to cost more than if you bought them at the bank, so if you’re not looking for collectible coins, it’s not worth it.

How Do I Roll Nickels?

There are many different kinds of coin wrappers, from paper to plastic. The easiest coin wrappers are hard plastic that opens up.

There are sections where 5-10 coins fit in so you can more easily keep track as you’re filling it up.

Canadian coin rolls have their own colour so this helps you even further with what coins go in what roll.

Here’s a rundown of the coins in circulation in Canada, their coin wrapper colour, how many coins per roll, and the values.

How Many Toonies in a Roll?

A roll of toonies has the highest coin value in Canada. There are 25 toonies in a roll, with each coin being worth $2.00.

How Many Dimes in a Roll?

A roll of dimes contains the most coins out of any denomination. This is because they’re so thin and the smallest coin in Canada.

How Many Quarters in a Roll?

How Many Loonies in a Roll?

Loonies are the $1.00 coin with the loon displayed on the backside of the coin. They are quite a large coin, and you can fit 25 loonies in a roll.

When you fill up a loonie roll, it is worth $25, the second-highest coin value in Canada.

How Many Pennies in a Roll?

While the Canadian penny was taken out of circulation in 2013, you may still have a lot of them. It’s still not too late to cash them in at your local bank.

Soon you won’t be able to give them to the bank, but there hasn’t been an official announcement as to when they’ll stop accepting pennies.

How many nickels go in a roll?

You can fit exactly 40 nickels in a roll, and the total worth once it’s filled up is $2.00. The Canadian nickel has a worth of 5 cents each.

How many nickels are in a roll of $5?

There is not a nickel roll available that is worth $5. A roll of nickels is 40 coins, and it is worth $2.00. You could fill up two rolls of nickels to make it worth $4, but then you’d have additional loose change to make up for the extra $1.00.

Each nickel has a value of 5 cents, so you would need 200 nickels to create a value of $10. This would be 5 rolls of nickels in total.

How many nickels are worth $2?

How many nickels are in circulation in Canada?

There are literally billions of nickels in circulation in Canada. While there aren’t any exact numbers, the Royal Canadian Mint distributes billions of coins per year. However, many nickels were taken out of circulation due to their metal content value.

How many 5 cents make a dollar? 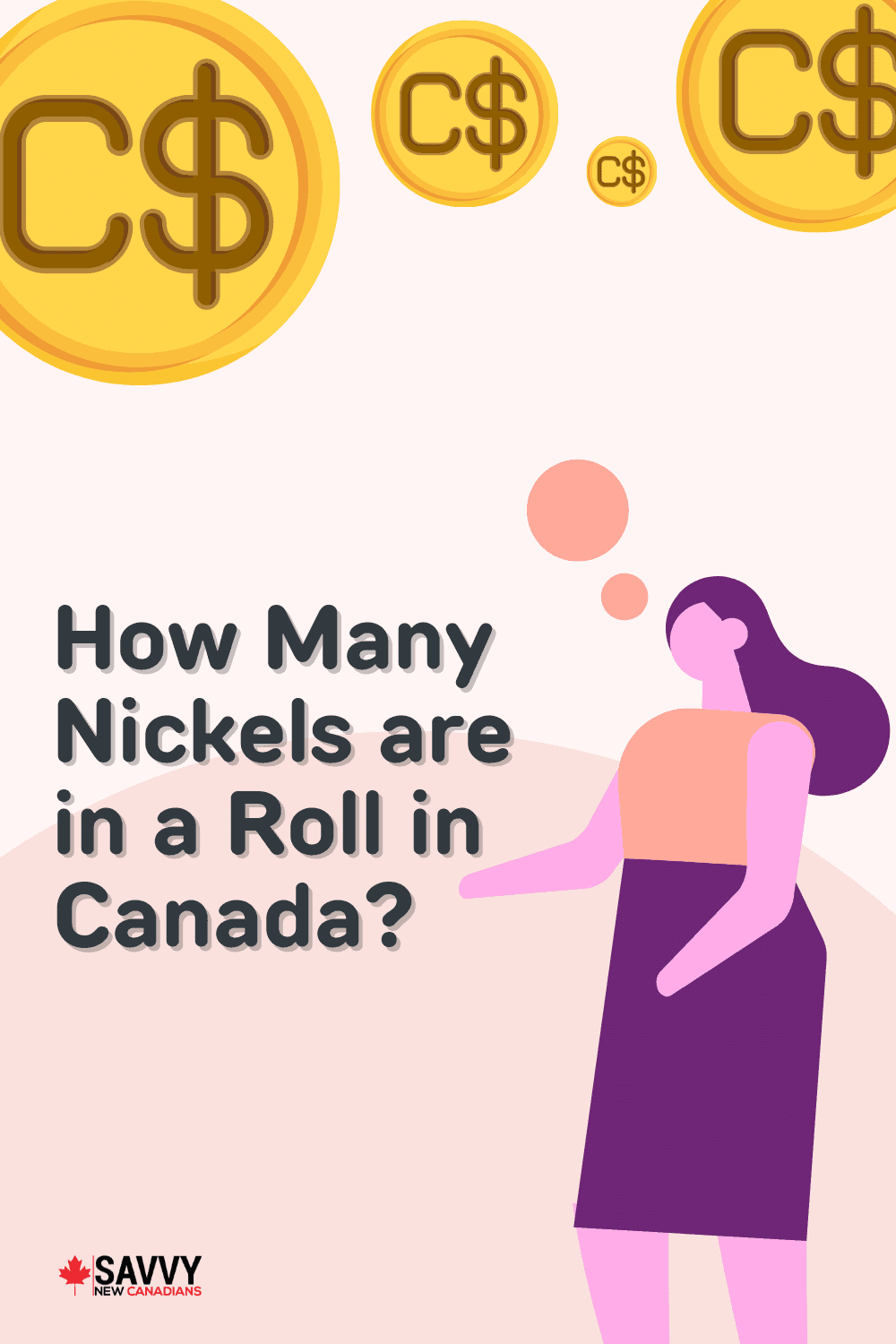 Earn 1% cash back on grocery purchases and up to 5% at select partners.

Save automatically and earn 0.5-1.5% interest on your balance.

One of the best no-fee credit cards in Canada.

Get 5% unlimited cash back at over 8,000 participating retailers.

Get a 15% cashback on your first purchases at partner stores.

Enoch Omololu is a personal finance expert and a veterinarian. He has a master’s degree in Finance and Investment Management from the University of Aberdeen Business School (Scotland) and has completed several courses and certificates in finance, including the Canadian Securities Course. He also has an MSc. in Agricultural Economics from the University of Manitoba and a Doctor of Veterinary Medicine degree from the University of Ibadan. Enoch is passionate about helping others win with their finances and has been writing about money matters for over a decade. He has been featured or quoted in The Globe and Mail, Winnipeg Free Press, Wealthsimple, CBC News, Financial Post, Toronto Star, CTV News, Canadian Securities Exchange, Credit Canada, National Post, and many other personal finance publications. You can learn more about him on the About Page.

Best Free Will Kits and Templates in Canada 2022

Best Online Wills in Quebec: Notarial Will, Will Kit Templates, and Costs

Up to $600 welcome bonus when you open a new premium chequing account!

Guaranteed approval credit card for poor credit. Up to 5% cash back ($25 sign-up bonus)!

Get instant and affordable life insurance quotes within minutes.

The content on this site is for informational and educational purposes only and is not intended as a substitute for professional financial advice. Always consult a licensed financial expert before making any decisions based on the information you read on this blog.

Articles on SavvyNewCanadians.com may contain affiliate links. That means if you decide to make a purchase or sign up through these links, we may earn a commission at no cost to you. Please read our disclaimer/disclosure for more info.